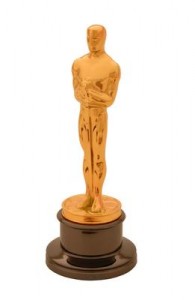 Deb and I spent a terrific day with my family yesterday.

We gathered in Solvang, the historic little Danish community (i.e., tourist trap) that sits a half-hour north of Santa Barbara. And we shopped, tasted wine, bought wine, and wrapped it all up with dinner at a nice Danish restaurant.

And I forgot entirely about the Oscars.

I didn’t even DVR the damn thing.

In fact, I’d still forgotten about the Oscars until this morning, when I plopped into a comfy chair at Starbucks with my cup of dark roast, booted up the ol’ laptop, and saw the news headlines.

The Hurt Locker? Kathryn Bigelow? What the –?!

Wasn’t the high-priced 3D leviathan Avatar supposed to sweep the Oscars this year? And wasn’t it assumed that its director, James Cameron (ironically, Bigelow’s ex), would equally clobber his competition?

I haven’t seen either The Hurt Locker or Avatar yet. I’m sure both are extraordinary in their own way. But I’m just wondering…

By the time the Oscars rolled around this year, Avatar was the box office champ of all time. Both it and Cameron had already swept the Golden Globes in January. The newspapers were filled with full-page ads for the film, all of them displaying critics’ rave reviews quoted out of context.

Did both the movie and its director finally get buried in their own hype?

Did even Hollywood finally become exhausted with the “I’m king of the world!” chest-thumping?

In marketing, too much hype often creates backlash.

If your ad, or website, or sales letter, or email is filled with exclamation points beyond all reason — and it uses way too many words like All-New, and Fantastic, and Groundbreaking — you might wanna shift into a lower gear.

We’re living in an era dominated more and more by weary skeptics. The Big Hype doesn’t work as well as it did even a decade ago.

Keep this in mind when you promote your new business or product or service.

Don’t over-hype and suffer like Avatar did at last night’s Oscars.

I’m interested in what you think about Avatar, the Oscars, and the hype. Comment below and let’s talk about it.

P.S. Quick tip: in your next marketing piece, try cutting your use of exclamation points in the copy by about half. Test it. Then let me know how that works for you.