Remember that TV series from years back called MacGyver? 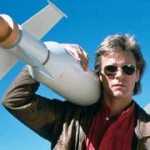 MacGyver was this spy guy who always escaped life-and-death situations by extraordinary means. He could blast his way out of an airtight cement bunker with just a paperclip, some pocket lint, and a Kit Kat bar.

I’ve even heard “MacGyver” used as a verb — like, “Hey, Mom! Dad’s been MacGyvering the toaster oven again!”

Anyway, the cool thing about this dude MacGyver was that whenever he was in a tight spot and you knew he had to be stressed out, he never seemed to panic.

I think he practiced what you might call “healthy desperation.”

It can make you act really stupid.

It can make you foolhardy.

It can make you impulsive.

It can make you dangerously hotheaded.

Whenever MacGyver was in an awful situation, that’s when he instinctively opened his mind and let his best ideas bubble to the surface.

Whenever all hope seemed lost, he earnestly considered options he might otherwise have ignored.

There are times you’re gonna feel desperate. You can count on it.

But don’t let desperation overwhelm you. Keep it reined in enough to let it work for you.

If you’ve had an opportunity to “do a MacGyver,” why not share it in the comments section below?

P.S. It’s a fact that one jungle animal that always uses desperation to its advantage is the rhinoceros. Learn hardcore rhino tactics at…