Just thought I’d share this tidbit with you from my pal Scott Alexander.

Scott’s the guy who wrote those popular motivational books Rhinoceros
Success, Advanced Rhinocerology, and Rhinocerotic Relativity. And
you might recall he and I shared rhino grunts not too long ago — http://www.wallyconger.com/rhinotactics.html.

Anyhoo, here’s the latest from Scott: 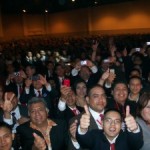 “I just got back from giving a talk in Omaha to over 4,000 Spanish-speaking rhinos. I was relating how the most successful people are the ones who learn to overcome the difficulties. Success is difficult and there are going to be obstacles. …

“I told the tale of one of my first talks to a group of drunk businessmen. There I was, 24 years old, giving my best rhino talk to these loaded guys. I was about half way done with my presentation when a roll came flying through the air just missing my head. I ducked and continued. Then another roll came flying at me. Then more, until I was stopped by a volley of rolls and cloth napkins. My wife was sitting in the front row crying.

“I don’t remember being upset or discouraged. Maybe puzzled. I kept giving
talks and that was the last time I had a roll thrown at me.

“In Omaha, I thought it would be interesting to have a few people come up and share some obstacles that they had overcome in their lives. I had no idea of the stories some of these people had. For the next 30 minutes, we heard stories of border crossings where they walked for days in the desert with no food, hungry kids, no money. One woman had lived under a bridge for 3 months. Some lost friends in the desert. Some were split up from their families. The audience was crying, I was crying.

“I felt so embarrassed. Here I was complaining about having rolls thrown at me. This group of people overcame incredible odds just to have a chance to work. My host crossed the border when he was 20 years old. He had a 2nd grade education, had no money, spoke no English. But he was a rhino and he wanted to do something with his life. He had ambition. He wanted to work, make money and be successful. He has done it.

“It was a life changing weekend for me.”

Scott had much more to say, but I don’t want to run too long here. Check out the whole inspiring story at http://scottrobertalexander.com/?p=326.