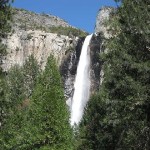 When we popped out of the Wawona Tunnel and into the Yosemite Valley last Thursday morning, I let out a girlish little squeal.

Embarrassing for sure. But I had a good reason.

All the waterfalls were gushing — probably tens of thousands of gallons a minute.

Not a common sight in California these past few years.

So it was kinda thrilling.

And it deserved a squeal, dammit.

In case you hadn’t heard, we’ve lived through a long run of drought years.

Water rationing was the rule of the day.

Then we got a lotta rain this past winter. Heck, it was still snowing at Yosemite three weeks ago.

So last week, there was waterfall drizzle on our windshield before we even reached Bridalveil Falls. And the roar of Yosemite Falls provided natural Muzak while we sipped martinis on the patio at the Ahwahnee.

Yessirree, the waterfalls in Yosemite are glorious right now, thanks to this past year’s rainfall and snow pack.

And you know what? Business works a lot like that, too.

The consistent energy and effort you put in today will have your small business literally gushing a year, maybe even a few months, from now.

But I’m not talking about mindless activity.

I mean highly focused, productive work, like I talked about in Fearless Freelancing 101.