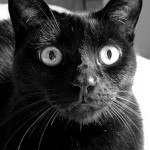 Ever tell somebody a joke and have ’em give you a blank stare?

I know a story about Søren Kierkegaard that always puts neoclassical Danish postmodernists into gut-busting stitches.

But I told it to my teenage niece last weekend and got nuttin’.

Just goes to show how crucial it is to accurately measure an audience before you unleash your messages or even products on them.

Before Apple scored a buncha homeruns, it misread its fan base with a whole series of clunkers.

Remember the Pippin, the game console slash computer no one wanted?

Or the Newton, which was arguably ahead of its time but pretty crappy anyway?

Heck, don’t even get me started on the Power Mac G4 Cube. Apple was so out of touch with its market and priced the Cube so ridiculously high that I decided to skip it and buy a new house instead.

Jay Abraham first drilled the message-to-market match principle into me many years ago — http://www.wallyconger.com/IncomeBuildingSystem — and I still forget it too often. Or worse yet, I ignore it.

Don’t make that mistake yourself.

When the prospects and customers you reach out to respond with only blank stares, you’d better reconsider who they are and adjust accordingly.

(By the way, if you click on the above link and subsequently make a purchase, I’m gonna make a few bucks. But I deserve a few bucks, right?)