What did it mean to you?

Was it a nice day off from work? A day for a picnic? A day to curse heightened freeway traffic?

Or was it a reminder of those Americans who’ve died in military service?

That was the original purpose of Memorial Day, you know — to serve as an anchor for remembrance of fallen soldiers.

But these days, the holiday is more firmly anchored to BBQs, strawberry festivals, and the start of summer.

So sometimes, memory anchors need to be reinforced over and over to successfully stay grounded to their initial purpose.

For one thing, Wayne’s made “Rhino” his middle name. His emails, his Facebook profile, his business cards all use “Wayne ‘Rhino’ Levangie.”

For another, he drives a rhino’d out PT Cruiser.

And on top of that, his house in Georgia is crammed to its rafters with rhino stuff. Just take a look at a few shelves of it. 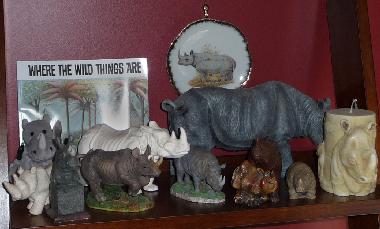 And that’s just for starters!

My mom might have called it clutter. But nope, each and every rhino doodad in Wayne’s life reminds him to damn the torpedoes, charge ahead, and crush any fear, worry, or doubt that might stand in his path.

So what are YOUR success anchors? And if you don’t have any, whadya gonna do about it?