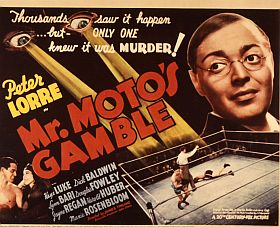 When everyone else is asleep, I’ll dig through my closet of DVDs and watch an old black-and-white B-movie thriller.

But Gamble’s the oddball of the series.

No globetrotting. No spy stuff. It’s a conventional murder mystery. And Mr. Moto, usually an eccentric agent for unnamed employers, is a professor of criminology in San Francisco.

Well, the truth behind the weirdness is that Mr. Moto’s Gamble started out as a movie called Charlie Chan at the Ringside.

Warner Oland, who’d already starred in 16 Chan movies, walked off the set during the first week of filming. Unable to lure him back, the studio did a cursory rewrite, turned Charlie Chan awkwardly into Mr. Moto (but left Keye Luke as Chan’s No. 1 son Lee!), and resumed shooting.

The result was an entertaining if patchwork Mr. Moto movie.

But it got made.

The producers didn’t waste time worrying about who or what they didn’t have to work with.

Instead, they worked with what they had.

And ended up with a pretty damn good product.

Think for a minute.

Have you left any business projects unfinished? Maybe because you got discouraged or frustrated? Or because the elements you’d planned to include were unavailable at the moment?

It might be time to revisit, rethink, and resurrect those incomplete projects. (http://www.wallyconger.com/rhinotactics.html)

You might discover that with a tweak or two, you’re already more than halfway done!

As always, I’m interested in hearing about your progress.