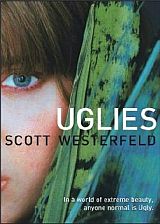 Scott Westerfeld’s Uglies series may be aimed at the “young adult” fiction market, but no kidding, it’s first-rate sci-fi.

And — surprise! — I’ve found a few business pointers in it.

If you get a chance, you ought to take a look.

The four novels — Uglies, Pretties, Specials, and Extras — foresee a day when an enforced operation at age 16 removes all physical differences and makes everybody “pretty.” Those “New Pretties” spend all their time partying, while younger “Uglies” pout enviously and play tricks on their elders.

Meanwhile, hidden communities of rebels who refuse the mandatory operations are busy recruiting members and dodging government enforcers, or “Specials.”

So what business lessons do these works of fiction offer?

Beneath their striking good looks, the Pretties are shallow and somewhat insipid. And people, even Pretties themselves, generally know it.

Likewise, you won’t fool customers when you wrap second-rate merchandise in fancy clothes.

Given a choice between similar products or services, customers will choose the one with the most unique selling proposition.

Even after turning Pretty, series protagonist Tally stands out distinctively from the crowd, because she fights the conformity forced upon her. She builds a tribe of fans by being authentically “Tally.”

Have you distinguished yourself as one of a kind among your competitors? Be sure you do.

When you separate yourself from the crowd, expect negativity and even hostility from your peers.

Tally’s greatest challenges come not from the authoritarian system but from her so-called friends. Her pretty friends resent her individuality, and her rebel comrades question her sincerity and loyalty.

I’ve talked about this before, but when you step outside the box and launch your own business ventures, most of your family and friends will try to discourage you.

They’ll ask why you wanna “rock the boat.”

They’ll offer lists of reasons why you won’t succeed.

You can count on that.

But don’t ignore Scott Westerfeld’s Uglies novels if you’re a fan of good science fiction. Heck, you might like ’em even if you’re not a sci-fi geek.