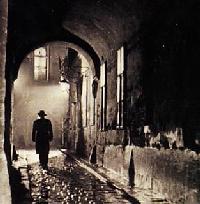 A few years ago, our friend Kris recognized my passion for old movies and asked me to recommend some “classics.”

Topping my list was the 1949 thriller The Third Man, starring Joseph Cotten. It’s one of the few highly praised films in cinematic history that’s actually better than everybody says it is.

A week or so later, Kris reported back. She’d watched the movie and loved it.

“You goofed, though” she said. “Joseph Cotten isn’t in it. It stars William Powell.”

Kris had rented The Thin Man by mistake.

Understandable. But what she missed unfortunately was Orson Welles’ unforgettable portrayal of Harry Lime, “about the worst racketeer who ever made a dirty living in [Vienna].”

Welles reprised the role as a more lovable, globetrotting rogue in an early 1950s British radio series, The Lives of Harry Lime, a prequel to The Third Man.

But whether evil racketeer or affable scoundrel, the Harry Lime character is always powerful, seductive, and memorable.

And that’s something each of us should aspire to be, whether we’re in our own business or not.

Does your mission in life — or unique sales proposition — pack a wallop?

Are you irresistible to the “right people,” or to prospective customers and clients?

Is your personal or business brand reliably burning itself into the minds of your intended audience?

Go watch The Third Man. Or listen to a few episodes of the old Harry Lime radio program. (You can find a lot of ’em online.)

P.S. If you wanna get on a real fast track to becoming more powerful, seductive, and memorable, shoot on over to wallyconger.com/rhinotactics.

A Vital Warning from Atop a Ferris Wheel