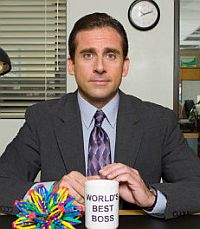 I’ve had to deal with my share of bad bosses.

My very first corporate boss was a micromanager type who didn’t trust any of her staff.

The second was an alcoholic.

Anyway, I just read an interview with the authors of a book called Working for You Isn’t Working for Me, and they offered a four-step program for improving “bad boss” scenarios. In a nutshell:

2. Detach emotionally from your boss.

3. Depersonalize by recognizing that their behavior isn’t about you.

4. Deal with it, preferably by coming to an understanding with your boss.

The writers suggest working their program for 90 days before exploring alternatives, like talking to Human Resources or looking for another job.

What they don’t point out is that for a lot of us, any boss is a “bad boss.”

We may move from “bad boss” to “slightly better boss” to “much better boss.” But the real problem is we just don’t deal well with authority, period.

We need to work for ourselves.

We need to be our own boss.

And it’s never been simpler and less expensive to start your own business than it is right now.

All you actually need is a laptop computer, an idea, and a group of people to sell stuff to.

Your biggest roadblock is overcoming worry and just getting started —
http://www.wallyconger.com/stopworrying.

So who’s got some “bad boss” stories to share?