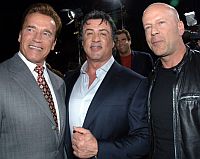 I watched a movie on Blu-ray last night called The Expendables.

It’s a so-so actioner starring Sylvester Stallone (who also wrote the screenplay and directed), Jason Statham, and Jet Li. And I’ll give it a thumbs-up for people who like the high-explosive stuff as much as I do.

But the movie really bugged me overall, because I remember seeing trailers and TV ads for it when it was released to theaters last summer.

All three names appeared together on posters.

Fact is, Willis and my departing state governor share about three minutes of very laidback, quiet time on screen in a single, disposable scene.

Methinks the studio’s marketing department goofed big time on this one.

They promoted the hell out of Arnold Schwarzenegger and Bruce Willis, two of the biggest action stars of the past 30 years…

How much better would it have been to not mention the cameo appearances at all  — then surprise audiences with it?

Instead of feeling cheated, fans would have been delighted. And The Expendables could conceivably have made twice what it finally did during its theatrical run.

Big sales lesson for the day:

Always give ’em more than they expect; don’t set their expectations higher than you can meet.

Now, I think it’s time to watch one of my fave Christmas movies – the first Die Hard. Yippee-ki-yay!

Oh, before I do…don’t forget that I have a brand spankin’ new special report available called 5 Simple Steps to Erase Money Worries Fast & Sleep Like a Baby in Even the Worst Financial Times.

It might help you through the often costly holiday season. And you can pick it up for just a few bucks — a lot less than you’ll spend taking your mother-in-law to McDonald’s.