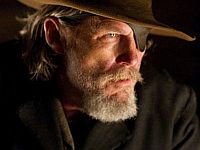 I’m no fan of movie remakes. So I was skeptical as hell about the Coen Brothers’ True Grit do-over.

But I gotta say this new Grit is, well, grittier than the original. It’s darker, colder, and weirder.

The movie’s not so much a remake of the John Wayne classic as it is a near word-for-word adaptation of the 1968 Charles Portis novel.

And you know what?

Ol’ Rooster’s got a lot of business wisdom rattlin’ around in him!

Just listen to these gems…

“You go for a man hard enough and fast enough, he don’t have time to think about how many’s with him; he thinks about himself, and how he might get clear of that wrath that’s about to set down on him.”

In other words, when you hit your prospects hard and fast enough with powerful sales messages that target their real or perceived problems, they won’t have time to talk themselves out of buying. They’ll be too emotionally involved in your irresistible offer.

“Ground’s too hard. Them men wanted a decent burial, they should have got themselves killed in summer.”

Anticipate unforeseen challenges in your business. And always think a step or two ahead — about the next product, the next offer, and the next promotion. That’s guaranteed to keep you ahead of your competitors.

Sometimes even your best-laid plans just don’t “pan out.” Don’t fret over it more than a few minutes. Move on.

The most profitable entrepreneurs are those who most identify with their customers and clients. Relationships are everything.

“A gun that’s unloaded and cocked ain’t good for nothin’.”

Do I really have to explain THAT one to you?