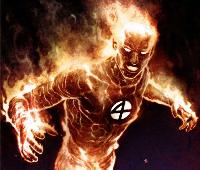 OK, I can’t be the only geek not buyin’ what Marvel Comics is hyping right now.

What they’re trying to sell us is the death of Johnny Storm, aka the Human Torch. The Torch has been a vital member of the Fantastic Four since Jack Kirby and Stan Lee created the groundbreaking super team in 1961.

Last week in Fantastic Four #587, Johnny by all accounts “flamed on” for the last time to save his niece, his nephew, and his pal Ben Grimm (aka the ever-lovin’ Thing).

Marvel pulled this same stunt a couple years back, when an assassin’s bullet killed Captain America. Well, Cap’s been resurrected just in time for this summer’s highly anticipated movie.

DC Comics knocked off Batman a year or so ago. Of course, he’s returned feisty as ever, now appearing in more comic books than you can shake a batarang at. (And by the way, you’ll find The Dark Knight Rises in theaters July 2012.)

Let’s see, the comic book moguls have so far killed off Superman, Blue Beetle, the second Robin, the Wasp, the original Flash… They all get re-launched sooner or later.

Is this formula getting stale or what?

There are plenty of tried-and-true marketing strategies that will deliver the goods forever.

And you can always take a reliable marketing idea and put a new twist on it.

But this “death of the superhero” ploy is something that’s best played sparingly. Hammer it into the ground over and over again and it becomes totally ineffective.

I’d rather see my heroes fly than die for awhile.