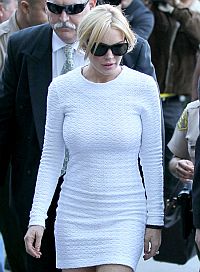 OK, I’m kidding. But Lindsay did send us solopreneurs an early Valentine of sorts last week — a sales lesson.

C’mon, you must’ve seen the story…

Already on probation for a bunch of DUI’s, she showed up at court to plead not guilty to felony grand-theft. If convicted, she could spend up to three years in the big house.

Didn’t faze the judge, though. He ignored the dress but gave her quite a lecture about the seriousness of the charges against her.

At least not in court.

Outside of court, that $575 dress has sold out everywhere.

I hope Lindsay’s getting a piece of THAT action. It’ll help defray some of her legal costs.

Anyway, the lesson here is that in sales, you have to carefully gauge your audience.

Lindsay’s target market was the judge. And she — pardon the pun — misjudged that market. She might’ve been better off presenting herself in a conservative gray suit.

How are you presenting your business — your “case,” so to speak — to your intended audience?

“Your audience gives you everything you need. They tell you. There is no director who can direct you like an audience.” — Fanny Brice