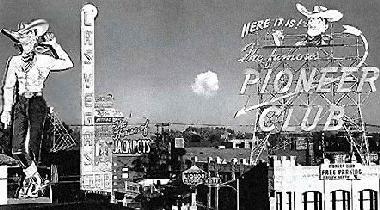 Back in the 1950s, when American kids practiced air raid drills at school and grownups planted bomb shelters in their backyards, Las Vegas promoted itself as “Atomic City” or — get ready for this one — “The Up and Atom City.”

Vegas is just 65 miles southeast of the 640-square-mile Nevada Test Site, where the U.S. carried out aboveground nuclear bomb tests for 12 years, from 1951 until 1963.

In those days, you could view mushroom clouds on the horizon from poolside at the Last Frontier, from the Sky Room at the Desert Inn, and from other hotspots.

So city leaders figgered, why not flaunt these front row seats to the apocalypse?

The Chamber of Commerce issued calendars of scheduled blasts and listed the best observation areas. Some businesses even held “Dawn Bomb Parties,” where guests guzzled drinks and danced while waiting for the Big Flash to light up the sky.

It was quite the doomsday bash.

Then the Limited Test Ban sent nuclear testing underground. And with it a Las Vegas profit stream.

But here’s the thing…

Fifty years later, Las Vegas is still the most outrageous, audacious, even tacky place on the planet.

That’s what draws its customers. That’s why it makes the money it does.

The nukes may be long gone, but in Vegas, you can still plunge over the top of a skyscraper, float down the canals of Venice in the middle of a hotel, zipline down the main drag of old downtown, watch the volcanic sinking of Atlantis in a shopping mall, and even suffer through a show by Carrot Top.

Every square foot of the town is, well, an attention-grabber.

What attention-grabbers have you fashioned for your business?