If you want a rich and fulfilling life, you’ve gotta develop an attitude of gratitude.

You’ve heard that before, right?

Well, if you want proof that it’s true, John Kralik is one helluva case study. 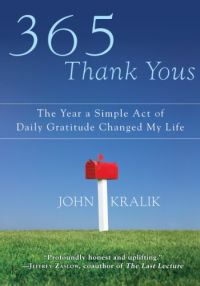 About three years ago, John’s life was in da crapper.

His law firm was failing.

His second marriage was going south.

He was estranged from two of his kids.

He was living in a stuffy little apartment.

“I had accomplished a tour de force of failure,” John admits.

Then, while hiking solo in the hills above Pasadena (and the Rose Parade) on New Year’s Day 2008, he heard a voice from outta nowhere.

John decided to take that advice seriously. So he set a goal to write 365 thank-you notes in the next 12 months.

Thank-you note by thank-you note, he began recognizing things he should be grateful for. And slowly but surely, John’s life started to turn around.

It didn’t happen rapidly, mind you. But it happened.

Heck, he was even appointed a judge of the Los Angeles Superior Court.

Anyway, John’s written a wonderful little memoir about that year or so in his life. It’s called 365 Thank Yous: The Year a Simple Act of Daily Gratitude Changed My Life.

I’m not pitching any of my own stuff today. Just John’s book, which you can pick up from Amazon or at most any local bookseller.