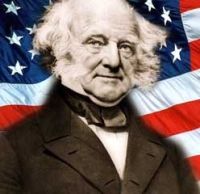 On HBO’s Real Time with Bill Maher the other night, the panel was talking about Donald Trump’s weird hair.

Did Trump have a chance in a presidential election, Maher asked, with hair like that?

Then someone remarked on how critical presidential hair actually is.

In fact, they said, a bald man hasn’t been voted into the White House since Dwight Eisenhower’s re-election in 1956, more than a half-century ago.

That made me sit upright because — gulp — I happen to be folically challenged myself.

Out of 44 U.S. Presidents, only six have been bald — John Adams and John Quincy Adams, who both wore large cover-up wigs; Martin van Buren, who overcompensated with enormous muttonchop sideburns; James Garfield, who was assassinated in office (not necessarily due to his baldness); Dwight Eisenhower, who was really a shoo-in, being a successful general and all; and finally Gerald Ford, who wasn’t even elected to the office.

And here’s something else…

The most failed presidential candidate of all time was baldie Harold Stassen, who ran unsuccessfully nine times. In some of those races, Stassen wore a toupee that the Washington Post said resembled “a sullen possum that had been dipped in bronze.”

OK, so I probably don’t have a great shot at the Oval Office.

Not being a corrupt power-seeker, I can live with that.

But lemme tell ya, I’d never let my hair loss, or any other thing, keep me from something I absolutely wanted.

So I’m always startled by the number of excuses I hear from folks who say they wanna get off the 9-to-5 treadmill but never do anything about it.

They’re all great reasons for not making a hasty, ill-timed jump into self-employment.

But they’re kinda crummy reasons for not finding an hour or two a day to dip your toe in the water and start building a future escape hatch for yourself.

I’ve said it before — http://www.wallyconger.com/fearlessfreelancing — and I’ll say it again…

If you really want to, you can start selling your skills and know-how to your own customers within 24 hours.

“Anyone can be confident with a full head of hair. But a confident bald man — there’s your diamond in the rough.” —  Larry David