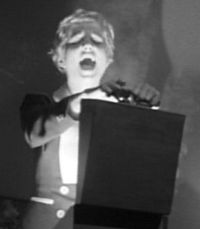 Ever heard of the Great Whatsit?

The term comes from one of my all-time favorite kickass late-night movies, the 1955 Mike Hammer film noir thriller Kiss Me Deadly. (I highly recommend Criterion’s new extras-laden Blu-ray release, by the way.)

Everybody in the movie — the feds, the mob, the cops, Hammer, and a handful of great-lookin’ dames — is chasing after the Great Whatsit, which is concealed in a peculiar lead-lined Pandora’s box.

The body count reaches mammoth proportions before the box’s glowing, apocalyptic contents are finally revealed. And then…

The influence of the Great Whatsit in the world of cinema is substantial. Just think Repo Man, Pulp Fiction, and Raiders of the Lost Ark.

And its influence in the world of business, marketing, and sales shouldn’t be ignored, either.

You might call your product or service (i.e., your Great Whatsit) “the next big thing,” or “the secret,” or “the shiny silver bullet,” or “the hush-hush recipe.”

But whatever you choose to call it, it’s always that mystifying, unspecified “something special” you want to turn into an obsession for your prospects and customers.

The Great Whatsit is the “perfect solution” to whatever ails the critters in your market.

The trick for you as a solopreneur is to figger out exactly how to infuse what it is you sell with so much “magic” that it becomes an irresistible Great Whatsit to your salivating crowd out there.

It’s powerful. So watch out. Use it carefully.

“And who are they? They’re the nameless ones who kill people for the great whatsit. Does it exist? Who cares?” — Velda, Kiss Me Deadly