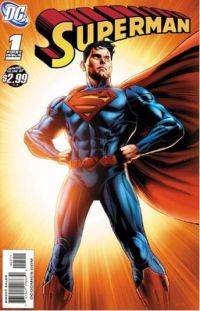 Whew! Talk about overhauling your business!

DC Comics has done something unprecedented.

In August, the company stopped publication of every one of its comic book titles. And this month, it’s introducing an all-new line of comics, 52 first issues featuring both new and familiar superheroes.

This includes re-launching icons like Superman, Batman, Wonder Woman, Green Lantern, and the Flash — some of ’em with re-tooled costumes and origin stories.

The most startling changes at this point may be in the Man of Steel.

But his costume’s been altered in some major ways. For example, he doesn’t wear red underpants on the outside of his leotard anymore. And Supe’s powers are stripped down. He can’t fly — yet, anyway. And he can be hurt big time; he bruises and bleeds like an everyday Metropolis citizen.

Of course, a lotta diehard fanboys are in an angry uproar.

They don’t like the DC bigwigs messin’ with these sacred comic book do-gooders!

Maybe this radical makeover will end up being the biggest “oops” in comic book history.

But as a longtime comics geek myself, here’s my reaction…

DC’s bold move seems to have generally re-energized the company’s stable of writers and artists.

The new books I’ve read so far are thoughtful, clever, and pack a real wallop.

Alas, sometimes it takes starting over at ground zero to get your business back on track.

But to start over, you’ve gotta start in the first place.

Have you taken a first step in your program to get off the ol’ 9-to-5 treadmill and build a business and new lifestyle for yourself?

Getting started is usually the hardest part, but it doesn’t have to be.

Go ahead. Get started.