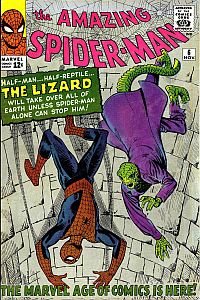 I’m a middle-aged geek. And I gobble up those hardcover collections of classic comic book reprints like I do peanut M&M’s.

In fact, the most treasured Christmas gift I got this past year was the third volume of Nick Fury, Agent of S.H.I.E.L.D. reprints from the late 1960s.

So anyway, I was digging through some very old Spider-Man stories yesterday afternoon, and I remembered how much value used to get squeezed into just a few pages of comic book way back when.

In just 20 pages, Peter Parker’d share breakfast with Aunt May, argue with his gal pal, sell photos to the Daily Bugle, and duke it out with the Lizard not once but two or three times!

Each issue — which then cost only 12 pennies — was epic!

These days, you’ve gotta buy at least four Spidey comics, at three or four bucks a throw, to read a single complete story!

I’m not sure why this is. Maybe it’s sloppy storytelling. Maybe graphic art styles have changed radically.

But fact is, you’re really not getting much bang for your buck anymore. No wonder the comic book industry is struggling.

What are you offering your customers?

Are they getting more value than they pay for?

Or are they getting “just enough”?

If they’re getting more than they pay for, you’ll see them over and over again.

Just some food for thought.