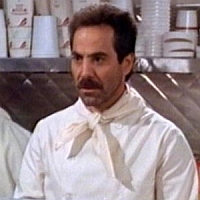 I just got back from WonderCon, a three-day sci-fi, comic book, multi-media geekfest, which was held this year at the Anaheim Convention Center, right next door to Disneyland.

WonderCon is kinda the younger, half-pint brother of July’s massive Comic-Con in San Diego. You might call it Comic-Con Lite.

But small as it was when compared to Comic-Con — maybe 40,000 people vs. the 130,000 they squeeze into San Diego — I still got to rub elbows with folks like Joshua Jackson, John Noble, and Blair Brown (from TV’s Fringe), action movie goddess Milla Jovovich (who was promoting Resident Evil 5), and even Larry Thomas (the Soup Nazi from Seinfeld).

It was nerd heaven.

We shared the convention center with two other groups. A girls’ volleyball tournament filled Hall B. And members of the United Spirit Association — cheerleaders and dance teams — were crammed into the arena. So in the lobbies, it was a real mix of cultures, with female teen athletes, wookies, and superheroes snapping pictures of each other.

Goes to show that there’re enough unique interest groups in this world to satisfy just about everybody. You just have to find your special niche.

In business, are you positioned so your niche of potential customers can find you?

If not, it’s only a matter of building your personal brand properly.

So what’s stopping you?