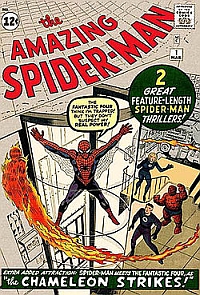 I’ve been meaning to write about this for the past couple of weeks, but have had some trouble getting my head around it.

I sold my raggedy-ass copy of Amazing Spider-Man #1 this month.

Yeah, the famous comic book from 1963, written by Stan “The Man” Lee and illustrated by the incomparable Steve Ditko.

In this first issue, Spidey rescued J. Jonah Jameson’s astronaut son from an outta-control space capsule, met the Fantastic Four, and exchanged blows with his very first “super-villain,” the Chameleon.

I bought the comic for five bucks (about 50 times its cover price) more years ago than I wanna think about. And over that time, I moved it from my parents’ house, to a college dormitory, through four apartments, to a condo, and to my current domicile.

It sat in closets for a whole lotta years. And now, it’s with a fella named Howard from the Bay Area.

I got a good deal for it. But Howard’ll sell it for at least twice what he paid me.

Anyway, before you ask, yeah, I’m feeling a sentimental sense of loss about selling the darn thing.

But with that sale also comes a feeling of freedom.

You see, after many years of “thinking about it,” I finally moved my ass, sold a rare old comic book that I’d held onto too long, and I made a tidy profit.

That silly little copy of Amazing Spider-Man #1 was like a weight around my neck, believe it or not.

It was a chore left undone that kept me from moving ahead.

What’s keeping you from forging on, getting things done?

It’s worth thinking about.

Meanwhile, maybe I should unload some of these old Beatles LPs…