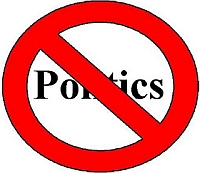 A few people have asked me about the upcoming presidential election.

And that tells me they’re not Facebook “friends,” who’re hit in the mug with my anti-political rants almost every day.

So at the risk of pissing off a few people (or a LOT of people, as the case may be), here’s my take on the upcoming election…

Despite both Left and Right telling you this election year is “the most important, life-changing moment in U.S. history,” it really ain’t.

Come the morning of November 7 (or late next January, the start of the next presidential term), I think you’ll find that things will be pretty much status quo.

Taxes will still be high.

Government agents will still be threatening your liberties.

Airline security will still be a bitch.

And whether your guy wins or not, you’ll still be grumpy in the long haul.

Growing your business by providing superior value to others.

Shift your focus off the political rhetoric (cuz that’s all it is, friend, meaningless rhetoric that’ll be forgotten after the election).

Get successful, in spite of the bastards.