To great fanfare this past weekend, Peter Capaldi was proclaimed the 11th “regeneration” of Doctor Who.

But am I the only one whose first reaction was, WTF, who’s this Peter Capaldi guy?

(When I finally saw a photo, I realized I’d seen him before. But I can’t tell you when or where.) 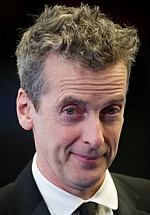 Anyway, Capaldi’s the 12th actor to play the Doctor in 50 years.

And at 55, he’s one of the oldest. Which I think is kinda cool, after a long trend of younger Doctors. (Hell, the last fella was just 27 when he first boarded the TARDIS.)

In case you’re unaware, the Doc is a Time Lord who can transform biologically into a new physical form with a different personality whenever he has to. In other words, when an actor tires of playing the Doctor, the character “regenerates.”

Unlike the 007 movies, when a new actor steps into the Doctor Who lead role, it’s acknowledged storywise. So just as we were loving David Tennant on the series, the story shifted and he changed into Matt Smith, whose time-travelin’ shoes will in turn soon be filled by Mr. Capaldi.

One thing’s for sure, this plot device keeps the half-century-old TV series fresh.

But lemme ask you this…

Is it time for you to “regenerate” yourself?

Hell, maybe a regeneration — or reinvention — of yourself or your business is way past due.

David Bowie used to habitually reinvent his rock and roll stage and album persona every couple of years — from Ziggy Stardust, to Aladdin Sane, to the Thin White Duke, to whomever.

“My business is failing,” someone tells me.

I suggest you put a radical new spin on it — REINVENT your business.

“I’ve felt lost ever since my divorce,” a friend complains.

I recommend you get a new hobby, buy a new wardrobe, join a gym — REINVENT yourself.

If that makes you uncomfortable, just take baby steps.

But if things are turning south for you, DO SOMETHING.

Doctor Who’s got the right idea.