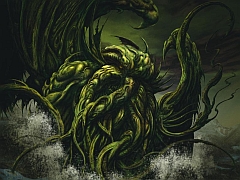 My pal Steve and I attended the H.P. Lovecraft Film Festival in the L.A. area this past weekend.

It was two spooky, crazyass days of watching feature-length movies and short films based on or inspired by stories of cosmic horror by the great 1920s and ’30s pulp writer H.P. Lovecraft.

In all, we must’a sat through at least 12 hours of film about ancient, malevolent, tentacled gods and other creepy-crawlies that go bump in the night.

We both had a blast.

Lovecraft’s fictional “monsters” were creatures like Dagon, Yog-Sothoth, Tsathoggua and, most famous of all, Cthulhu.

Not only did these Elder Gods and Great Old Ones generally have unpronounceable names, they were usually indescribable.

As Lovecraft himself once wrote, “The basis of all true cosmic horror is violation of the order of nature, and the profoundest violations are always the least concrete and describable.”

That’s terrific when it comes to stories and movies scaring the crap out of you.

But it ain’t good when you’re trying to distinguish yourself and your business in a crowded marketplace.

Your personal brand — whether online or offline — is what jumps into a person’s head when they hear your name. And it’s crucial to your success.

Every time you post a blog comment, send an email to your list, stick your neck out on a forum, or say something really lame on Facebook, you’ve unconsciously cemented another brick into your personal “brand.”

So you wanna get it right.

You sure don’t want to be indescribable.

Leave the Shoggoths to H.P. Lovecraft.