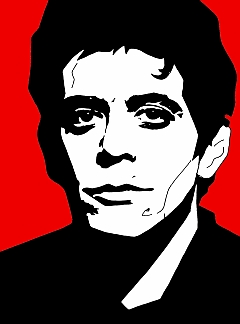 After me and my droogies get the scotch poured and clip our ceegars, the banter rolls just about anywhere.

Sometimes the subject of music comes up.

And frequently we’ll argue the greatest rock songs of all time.

Standing on the corner,
Suitcase in my hand
Jack is in his corset, and Jane is in her vest,
And me I’m in a rock’n’roll band Hah!
Ridin’ in a Stutz Bear Cat, Jim
You know, those were different times!
Oh, all the poets they studied rules of verse
And those ladies, they rolled their eyes

So dammit, Lou Reed died this past weekend.

Reed’s work was avant-garde but sprung from the streets. It shaped rock for five decades.

Would there have been glam or punk without him?

But here was Lou Reed’s secret…

At its core, his music was bare-bones and simple as hell.

“One chord is fine,” he said. “Two chords are pushing it. Three chords and you’re into jazz.”

“Sweet Jane” has maybe four chords in it.

I guess it was one of his more sophisticated pieces. (Not.)

His music rocks. It’s memorable. It hits you where you live.

That’s why it works.

In life, even in building a business, keep it simple.

Simplicity is the lesson to be learned from Lou Reed.

“There’s only X amount of time,” Reed said. “You can do whatever you want with that time. It’s your time.”