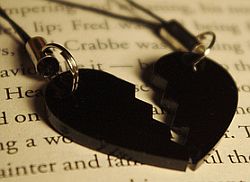 I dunno if you saw this in the news, so I’ve just gotta share.

Seems some lamebrain in Australia sent his ex gal pal a $200,000 invoice after she turned down his marriage proposal.

He figgers that since his four-year “investment” in their relationship didn’t pan out like he hoped, she now owes him for all the Zumba classes, dental work, tummy tucks, and breast implants he paid for during the wooing process.

“She will not get away with this,” he says.

She claims they were never romantically involved, that any money he gave her was his choice, and that he’s a “shark.”

I say he’s an idjit.

Sure, he made a lotta bad choices — the first being not recognizing a colossal gold digger when he sees one.

But worse, he’s chosen to wallow in a past failure rather than brush himself off and plow ahead to chart new territory.

How much wallowing in the past are YOU doing?

Well, knock it off and go here…