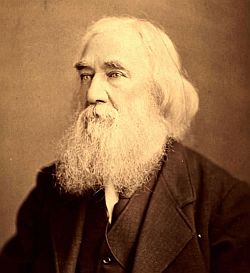 Nuttin’ I love more than rebels, mavericks, and nonconformists.

More than 165 years ago, Spooner took on the U.S. Government and almost put the U.S. Post Office outta business!

Postage rates were bugnutz back in 1844. Mailing a quarter-ounce letter from Boston to Albany via the Western Railroad cost about the same as carrying a barrel of flour the same distance.

That pissed off Lysander.

So he launched his own private postal service — the American Letter Mail Company — and started delivering mail a lot cheaper and more efficiently.

So politicians did what they’ve always done.

They tried to destroy Lysander Spooner.

Federal thugs threatened the railroad with removal of all government mails unless space and passage were refused to private letter carriers.

An agent of Spooner’s company was actually found guilty and fined for transporting letters in a railroad car over a “U.S. post road.”

Spooner fought the feds in court. A shitstorm ensued.

But so did Spooner’s.

Finally, in 1851, Congress played its final hand. It passed a law to protect the government’s monopoly on mail distribution.

Spooner was forced out of business.

But by then, his American Letter Mail Company had competitively pushed the government postal rate down to 3¢ for letter delivery anywhere in the country.

And it stayed there for more than a century.

Spooner lost the battle but won the war.

That’s what great entrepreneurs do.

They question the rules. They mix it up. They make money in a venture. Then they move on when that venture’s tapped out or the market changes.

Here’s something I know is true…

If your gut says something needs doing, just start doing it.

Worry about the what-if’s and details later.

You’ll have a blast.