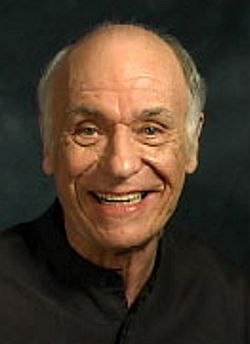 It’s that time of year again!

I’m talking about when Big Media celebrates every “notable” person who’s shuffled off this mortal coil in the past 12 months.

But you might not know that Jay Conrad Levinson, the champion of small business and father of Guerrilla Marketing, died this past October. Jay was 80.

I’m a little bummed that I missed this news until yesterday, cuz Levinson shook up my life a LOT.

Way back, when my corporate masters gave me the ol’ heave-ho, a friend slipped me a raggedy-ass old booklet by Jay Levinson called Secrets of Successful Free-Lancing.

Jay had self-published and sold it by mail order back in the 1970s. It was no bigger’n a greeting card, just a few pages long, and really little more than chapter headings and bullet points.

But that critter changed my life.

Jay Levinson believed in the work/life balance. In fact, even with his heavy workload, he pretty much maintained a three-day workweek.

The bitesize tips he offered in Secrets of Successful Free-Lancing gave me the confidence and how-to I needed to launch my own freelance business.

That pamphlet became my go-to whenever I hit a wall. And it “mentored” me for many years.

Anyway, a couple of years ago, I realized that Jay’s little booklet was looooong out of print, so I decided to kinda follow his lead.

I wrote down — in simple bullet points — all of the “secrets of successful freelancing” that worked for me over a decade or so.

I wrote down the nuts ’n bolts that I used to move from wage slave to freelancer, from 9-to-5 hamster wheel to a more liberated, flexible life.

I called the collection of tips The Quick Start Guide to Fearless Freelancing and packaged it with a couple of audios and other cool stuff.

You can still grab a copy…

Take it for a spin and lemme know how it works for you.