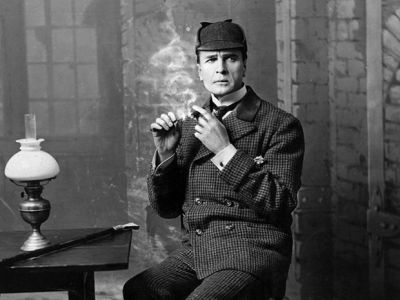 The public’s image of Sherlock Holmes may run more along the lines of Benedict Cumberbatch and Robert Downey, Jr., these days. But the guy who started it all, on stage in 1899, was a popular American actor named William Gillette.

With his melodramatic stage play “Sherlock Holmes,” Gillette made the deerstalker hunting cap and curved calabash pipe iconic. Neither of them were mentioned in the original Arthur Conan Doyle stories.

And after hundreds of performances in the U.S. and overseas, in 1916, Gillette brought the show to the screen in the only film he ever made.

As a Sherlockian oldtimer, I’d heard for years that Gillette’s movie — the only record of his famous portrayal — was forever lost, probably turned to nitrate dust decades ago.

But last year, a staff member at a film archive in France amazingly stumbled across a copy of it, hidden among moldering old film cans. And this past weekend, Deb and I were privileged to attend a rare public screening of the silent movie, complete with live organ accompaniment, at the grand Arlington Theater in nearby Santa Barbara.

What a treat – to be able to watch a classic “lost” Sherlock Holmes film just as it would’ve been seen by theater audiences a century ago!

I’ve always believed that Doyle’s fictional hero, despite his eccentricities, revealed some traits that can turn people’s lives around for the better. Among them – his sense of justice, determination, persistence, and his belief in what might be called the Law of Subtraction.

For that reason alone, I think a great way to spend a late summer evening is to dip into the classic Holmes stories. And in the next few weeks, you’ll even be able to find that “lost” Gillette movie on Blu-ray and DVD.

The game is definitely afoot!