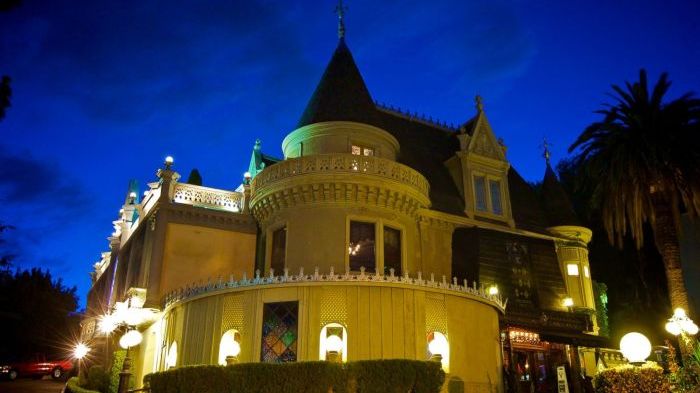 This past Sunday night was really magic.

At the invitation of a friend, Deb and I had dinner at the Magic Castle in Hollywood, the private clubhouse of the internationally recognized Academy of Magical Arts.

Members of the Academy include (or have included) such magicians as Harry Blackstone, Jr., Penn & Teller, Walter B. Gibson (creator of The Shadow), Siegfried & Roy, David Copperfield, and Doug Henning.

This club is so exclusive that I had to wear a jacket and tie, something I don’t even do for weddings these days.

But let me tell you about the Castle.

The mansion was built in 1908 (it became the clubhouse in the early 1960s), and it’s located on a hillside off Franklin, overlooking Hollywood Boulevard. Its several floors are stuffed with rare memorabilia, enormous antique posters, and Victorian-era furniture. And the place includes a gorgeous dining room, several private banquet rooms, five unique bars (I don’t think I found ’em all), and four or five auditoriums of various sizes and shapes.

A typical evening at the Castle consists of eating well, drinking heartily, and cramming as many magic shows as you can into one night, everything from close-up stuff to big stage illusions. You just can’t see it all.

Anyway, our night was, well, magical. And if you’re ever offered the opportunity to visit the Magic Castle, drop everything else and go.

“Look at this life,” the great magician Harry Houdini once said, “all mystery and magic!”

Sometimes, though, you have to either tap purposely into that magic or make it yourself.