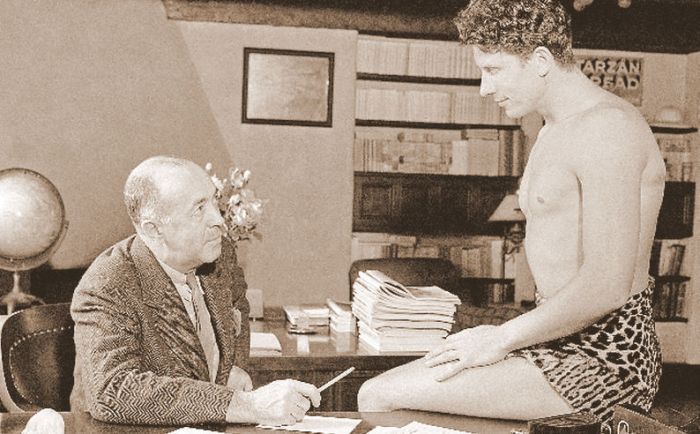 Today marks the birth of Edgar Rice Burroughs, 141 years ago.

Maybe that’s no big deal to you. But to an overgrown kid like me, hypnotized by Tarzan movies on his grandma’s old 13-inch TV when I was just knee-high to Cheeta, it’s a very big deal.

Burroughs created Tarzan and wrote 24 novels about him. And those books have inspired hundreds of films, and radio serials, and comic strips, and comic books, and TV shows, and Saturday morning cartoons for a century.

(By the way, if you didn’t see this summer’s blockbuster The Legend of Tarzan, I gotta wonder, WTF? You’ll have no excuses after it comes out on DVD next month. I promise you’ll have fun.)

But back to Burroughs…

He was in his late 30s and selling pencil-sharpeners when he started reading pulp fiction magazines. And as he explained it, “I thought if people were paid for writing rot such as I read in some of those magazines, I could write stories just as rotten. As a matter of fact, although I had never written a story, I knew absolutely that I could write stories just as entertaining and probably a whole lot more so.”

So within weeks, Burroughs wrote his first serialized magazine story, which set up his long-running John Carter of Mars series. Soon after, he cranked out Tarzan of the Apes, his first book about the ape-man and the greatest adventure novel ever written.

By the time Burroughs died in 1950, he’d written dozens of books about extraordinary worlds and iconic heroes.

Ray Bradbury once said, “Edgar Rice Burroughs never would have looked upon himself as a social mover and shaker with social obligations. But as it turns out — and I love to say it because it upsets everyone terribly — Burroughs is probably the most influential writer in the entire history of the world.

“By giving romance and adventure to a whole generation of boys, Burroughs caused them to go out and decide to become special.”

So I have to ask…

Who or what has caused YOU to go out and become special?

Or are you still waiting for the “special fairy” to sprinkle you with magic dust to finally get you outta the barcalounger and doing something to change your life?

OK, OK. Let me be that special fairy for you.

I just this week produced a quick-to-read “hot sheet” revealing my 78 favorite life hacks to get you off the 9-to-5 treadmill of financial anxiety and job burnout.

I’ve crammed everything I know about getting started in your own business, hitting money goals rapidly, and staying profitable into bite-sized chunks.

That means that instead of slogging through tons of dull instruction, you can whip through this report and start making moola right away.

It’ll probably take you 20 minutes to read this hot sheet. But you’ll want to spend more time with it than that.

You know you want to grab this. Find it here…