Deb and I spent the better part of last Saturday hanging with a “horsey” crowd out in the sticks, drinking brewskies and kickin’ you-can-imagine-what. We don’t ride horses ourselves, but we were cheering on my sister Nancy, who does. 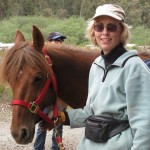 Nancy and her quarterhorse Ginger competed in a 25-mile endurance race at Montano de Oro State Park here in San Luis Obispo County, about 40 minutes up the California coast from us.

The park is filled with rugged cliffs, secluded sandy beaches, streams, canyons, and hills. So it was one hell of a ride (of which, as mere observers, Deb and I only saw the first and last, oh, 500 feet)!

Nancy came in 2nd, out of a field of several dozen riders! (She and the first place winner actually finished at the same time, but the “winner” is the horse whose heart rate first returns to normal after the race.)

Before this, my sister had never placed higher than 14th in one of these races, and she’s been in a few.

Now, I was impressed by my sister’s accomplishment, but even more so when I learned that:

(1) Quarterhorses don’t usually participate in endurance races, let alone finish in the top few slots. And this competition, with the exception of Ginger and a few others, was filled with Arabian horses, known for long-distance travel.

Lesson learned: Even “little guys,” with the odds against ’em, can be winners.

(2) Nancy had no idea during the race that she was even leading the pack!

Lesson learned: If you stay focused on FINISHING your “race,” whatever it is, you’ll always be ahead of most everybody else.

So I watched Nancy compete in a horserace for the very first time last weekend, saw her win big, and even learned some lessons along the way.

Now let me ask you guys:

If you haven’t started in your particular race yet, whether business or personal, why not?

And if you HAVE started your race, how focused are you on finishing it?