What a wonderful day.

A package arrived in the mail. And inside were two sets of DVDs from Walt Disney Home Entertainment – the complete 1950s Zorro TV series. Two seasons, 78 episodes, and four hour-long “specials,” all starring the late, great Guy Williams. (Williams played the dad on Lost in Space a few years later.) 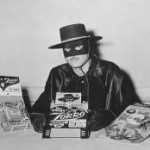 When I was a kid in the ‘60s, I had the Zorro hat, mask, and cape. I had the plastic sword that held a piece of chalk so you could “carve” a Z on your mom’s clean kitchen walls. I even had the Zorro lunchbox.

But who’da thunk someday I’d possess copies of these shows and enjoy them whenever I wanted?

Each season of the show is cradled in its own “Walt Disney Treasures” black metal box, and besides the discs, each includes additional collectible goodies.

Each box also includes a numbered “Certificate of Authenticity.”

And I found a couple of marketing secrets, too. (Of course.)

Sure, you’ve heard this a zillion times. But have you applied it to your business?

When I pre-ordered the Zorro DVDs, nobody mentioned collectible lapel pins, photo postcards, info booklets, lithographs, or snazzy black metal boxes. Or even bonus features on the discs.

It was like Christmas when I opened the package. One surprise after another.

So make every sale to your customers a Christmas-like experience.

Cynics will call this a sales ploy and a buncha bunk.

Well, it certainly is a “sales ploy.”

But it’s definitely not a buncha bunk.

A while back, Disney released a $30 box of DVDs I was curious about but procrastinated over. When I finally decided to buy two months later, the set was “out of print” and available only through dealers for 150 bucks or more.

I learned a painful lesson: when Disney says something’s “limited,” they ain’t kidding.

If you produce a small amount of product, or even set a deadline on your offer, you add to the item’s perceived value and desirability.

Just make sure your claim is sincere. If you don’t, you won’t fool ‘em more than once.

Now, if you’ll excuse me, I’m gonna hunker down and watch an hour or two of Zorro.

P.S. While I’m sitting in front of the tube, you might wanna take advantage of a wagonload of sales and marketing advice at…

I hope you don’t mind, but if you click on the link and buy the product described, I will receive a referral commission. And you’ll have my undying gratitude!