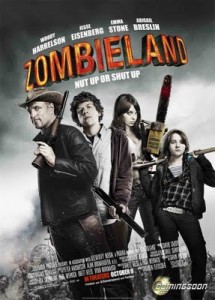 Deb left me home alone for a few hours last night, so I figgered it was safe to watch Zombieland, which arrived from Netflix on Tuesday.

If you haven’t seen the movie yet, two of the stars are Woody Harrelson, from Cheers, and the adorable little girl from Little Miss Sunshine (who’s still adorable but not so little anymore).

The movie’s a comedic gorefest, so it’s definitely not for the squeamish. But if you enjoy the walking dead as much as I do, it’s probably worth adding to your “must see” list.

Anyway, something dawned on me while watching Zombieland.

Could it be that the craving for entertainment and stuff to buy is so deeply hardwired into our brains that it might even survive — gulp — death?

That’s something to think about when you’re in business for yourself.

There’s a one-two punch when it comes to sales.

Second, if you can entertain people, they’ll grow to like you. And if they like you, they’re more likely to buy from you instead of from your less amusing competitors.

Just don’t waste it on zombies.

They may wanna buy stuff. But they never carry cash.