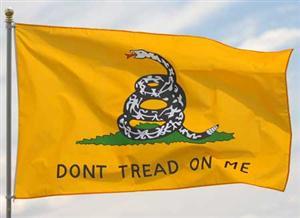 The only time I really do any “house cleaning” is when I’m on a mission to find a specific something.

Not long ago, it was an old Velvet Underground CD I hadda find right away because I’d just heard “Sweet Jane” on a radio outside Starbucks. And I was sure it was inside one of 29 boxes stacked in my garage.

This past weekend, I went looking for my Gadsden flag.

You know the Gadsden flag, right?

It’s the brilliant yellow flag from the American Revolution with the coiled rattler on it and the words “Don’t Tread On Me” stitched at the bottom.

To be honest, nothing’s actually stitched on my flag. The snake and words are screened onto ultra-flammable polyester. I bought it at a gun show during a seditious moment a few years ago.

Anyway, preparing for Fourth of July, I dug out my rattlesnake banner, which I finally discovered stuffed inside a box full of old sci-fi novels.

So the stars and stripes won’t fly at my house this week. Instead, I’ll hoist my polyester Gadsden flag, named for its designer, “the Sam Adams of South Carolina,” radical-liberal Son of Liberty Christopher Gadsden.

“You’re not being very patriotic,” a neighbor said when I told him my plan.

Like too many people, this guy’s got no historical grounding. He can’t wrap his mind around July 4th actually being a salute to the treasonous Declaration of Independence and magnificent traitors like Sam Adams, Thomas Jefferson, Patrick Henry and, yes, Christopher Gadsden.

July 4th is about thinking outside the box and declaring independence — from busybodies who say you can’t or shouldn’t, from despair, from discouragement, from frustration.

Independence Day should celebrate personal liberty for all of us.

I don’t care if you aspire to free yourself from a dead-end job, a dead-end relationship, or a dead-end whatever.

This week, whether literally or figuratively, why not lift high the Gadsden flag in your life?