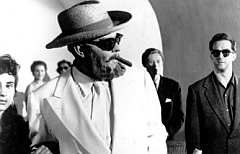 I sat in the backyard with a fine cigar yesterday and listened to some old-time radio — specifically, the Orson Welles’ series The Lives of Harry Lime.

The show was a spin-off prequel to the classic movie The Third Man, and it featured the unforgettable Anton Karras zither music from that film.

Anyhoo, the episode I heard was called “Man of Mystery,” and it’s got a weird history.

A year or so after its first broadcast in 1952, Welles expanded the half-hour story into a very quirky movie (without the Harry Lime character) that usually goes by the title Mr. Arkadin. It’s also sometimes called Confidential Report, depending on which of five radically different edits you see.

The movie was thought so unmarketable at the time that it didn’t even get its tiny U.S. release until almost a decade after it was filmed. Welles called it the “biggest disaster” of his life.

But I think the movie’s terrific, and so is the “Man of Mystery” radio episode.

The story’s about Gregory Arkadin, one of the world’s richest men, who’s got no memory of his past. So he hires a guy (in the radio show, Harry Lime) to dig up the dirt and report back.

Of course, all sorts of deadly shenanigans result.

But think about it…

Wouldn’t it be great if we could grab hold of just a smidge of Mr. Arkadin’s so-called memory loss?

Like forget about all those failures from our past, both big and small.

You know, all the crap that keeps us from marching forward toward our dreams.

Sure, we can learn from our failures. But when we cling to ’em like a dying man to a life raft… Not a good thing.