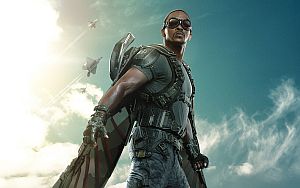 Have you caught Captain America: The Winter Soldier yet?

I wasn’t the first in line this past weekend, but I was damn close. And the movie didn’t disappoint.

No missteps in THIS baby. At least none that my geeky eyeballs cared to notice. And it’s probably the best political thriller I’ve seen in the past decade.

Of course, between all the high-velocity shenanigans the film delivers, there’s plenty of humor.

Some of it even comes in the middle of the movie’s most exhilarating action scenes.

Take, for instance, when Captain America and his new pal Sam Wilson (aka Falcon) dash out of an exploding building to launch a new attack on Hydra agents.

“How do we tell the good guys from the bad guys?” asks Falcon.

“If they’re shooting at you, they’re bad!” replies Cap.

When people keep firing missiles at you — like disapproval, negativity, and discouragement — odds are they’re “bad guys.”

They may not intend to be bad guys, and regrettably, they may be family and friends.

But for whatever reasons, there are folks who’ll constantly lob obstacles in your way and try to slow you down in life.

“The price of freedom is high…and it’s a price I’m willing to pay.” — Steve Rogers