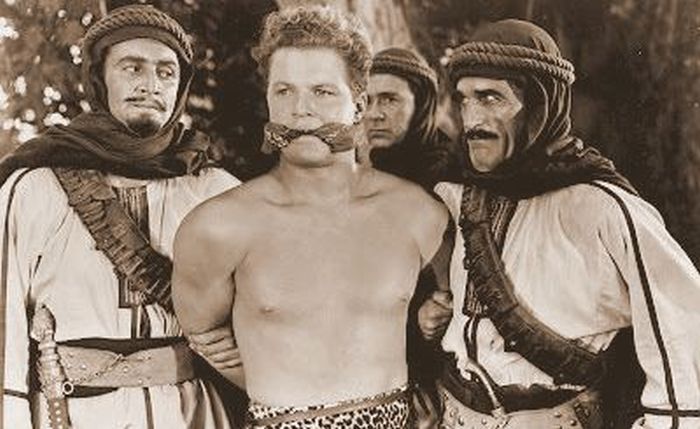 I was watching 1947’s Tarzan and the Huntress late last night and remembered that this week marks six years since Johnny Sheffield died.

Johnny was one of the iconic “kid sidekicks.” He played “Boy” to Johnny Weissmuller’s Tarzan in the 1930s and ’40s, and Huntress was his last performance as the character. (In fact, Weissmuller had just one film to go before he hung up his own loincloth.)

Sheffield the jungle boy would’a been 85 this year.

Way back when I was a munchkin, watching the old Weissmuller movies on Channel 9 in L.A., I thought Boy was a pain in the ass.

Tarzan would say, “Boy stay with Cheetah.” But no sooner would the Ape Man leap into the trees than Boy would chase after a baby elephant and end up captured by headhunters, or ivory poachers, or warriors from Opar.

Of course, Cheetah’d fetch Tarz, who’d stop whatever he was doing (usually skinny-dipping with Jane) to rescue the little creep.

But there was one good thing you could always say about Boy.

When he needed help — like when cannibals were cooking him in a boiling pot of water — he knew where to find it. And he wasn’t afraid to ask for it.

It’s a shame most of us aren’t more like Boy in that way.

I don’t know about you, but when I run into a problem, I usually avoid asking for help and end up wasting a lot of time that could be better spent elsewhere.

Sure, fumbling and bumbling can be a “learning experience.” But problems get solved faster and more efficiently when you know where to look for the answers.

Well, if you dream of jumping off the job treadmill — or fear that you’ll soon be booted off against your will — I’ve got SOME of the answers.

And I’ve pulled them together into a quick-to-read, no-BS report that you can grab right here…