He was 87 and recovering from a stroke he suffered last month.

I like to think the old guy still had a few great novels inside him. Which is sad, cuz I’ll never get to read ’em.

In case you don’t know, Leonard is one of the greats. In the 1950s and early ’60s, he wrote blockbuster westerns. Then he fine-tuned the modern crime novel and wrote classics like Get Shorty, Rum Punch, and Out of Sight.

A whole bunch’a his stuff has been turned into movies. 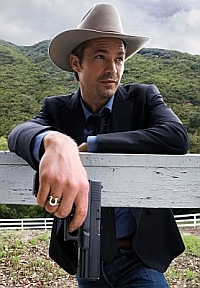 Actually, if you watch the FX series Justified, you know Elmore. The show’s U.S. Marshal Raylan Givens comes from his novels Pronto and Riding the Rap and the short story “Fire in the Hole.”

That TV show captures Leonard’s dialogue and spirit like nothing else I’ve ever seen on screen, big or small. If you don’t watch it, you really oughta.

But he left some good advice before he passed.

In an essay titled “Elmore Leonard’s Ten Rules of Writing,” he said: “My most important rule is one that sums up the 10: If it sounds like writing, I rewrite it.”

Any of us who write — and that’s all of us, really, whether we write sales copy, or blog posts, or create info products, or just tweet — should pay attention to that one.

Let me put it a bit differently…

Online, offline, in your relationships, in your work, be genuine.

“I spent most of my dough on booze, broads, and boats, and the rest I wasted.” — Elmore Leonard, La Brava