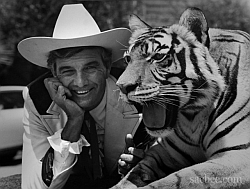 When I was a Los Angeles punk, my droogies and I used to drink beer, watch TV by the crapload, and laugh at Cal Worthington.

Cal Worthington was one of the world’s most notorious car dealers. His TV ads interrupted the Sunday afternoon Godzilla marathons every six to eight minutes.

Cal spent less airtime focusing on his cars than he did shouting “I’ll stand on my head to make you a deal!” while perched upside-down on the hood of a Dodge truck.

Then there was Cal’s rotation of “dogs.”

The announcer would yell “Here’s Cal Worthington and his dog Spot!” And Cal would ride onto his lot on the back of a hippo. Or he’d wrestle playfully with a tiger or saddle up a killer whale (no kidding) or some other big critter.

My pals and I thought Cal was an idjit.

Of course, he was a multi-millionaire, and we were counting pennies between us to buy a six-pack of Bud.

Years later, when I got into sales and marketing, it dawned on me what a genius Cal Worthington had always been.

He was a whiz kid of outrageous marketing. A showman to rival P.T. Barnum.

He was a master of personal branding.

He knew the secret to attracting attention and getting people out to his car lots.

Sure, Cal’s prices were good. But hell, what if you got a great deal on a convertible AND got to meet his gorilla named Spot?

Cal passed away last week at 92. They’ll probably bury him in his cowboy hat — all six and a half feet of him.

You could do wonders for your business today just by searching YouTube for some old Cal Worthington commercials.

They’re there. I just finished watching a few.