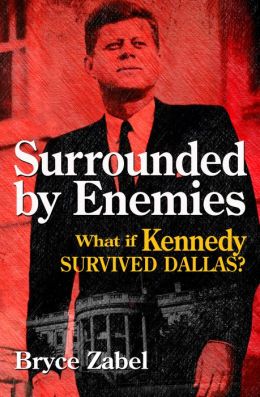 I spent most of the weekend reading Bryce Zabel’s new book Surrounded by Enemies: What if Kennedy Survived Dallas?

That figgers, cuz next month marks 50 years since the assassination of President Kennedy.

Being kind’ve a tinfoil hat guy, I’ve read a LOT of stuff about JFK and Dealey Plaza.

But Zabel’s book blows away most others.

A lot of writers have speculated about the world of peace and equality Jack Kennedy might have orchestrated had his term of office not been squished.

But in Zabel’s alternative narrative — cleverly formatted as a newsmagazine’s commemorative retrospective — JFK’s survival might have unleashed a Constitutional crisis and even calls for his impeachment.

Not really so far-fetched, knowing what we know now about Kennedy’s dark secrets, a half-century later.

It’s fascinating stuff, and I highly recommend this book to you.

You know, most of us follow Bryce Zabel’s lead when it comes to our own lives.

What if my parents had been more encouraging?

What if I’d gone to a better school?

What if I’d been able to move to Los Angeles like I wanted to?

As fun as it is to speculate about what might have been, you really ought’a focus on what CAN happen in your life, starting right now from where you are.

Shift your perspective, broaden your thinking, expand your horizons.

Changing it up doesn’t have to be as hard as you seem to wanna make it.

Why not write your own playbook?