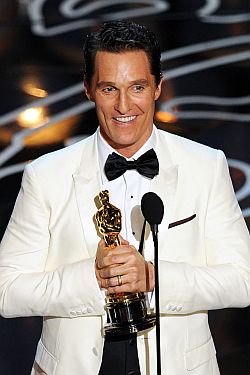 In all the post-Oscars media hoopla yesterday, one guy from the Time magazine website REALLY squeezed my cajones.

He wrote: “After winning for his role as Ron Woodroof in Dallas Buyer’s Club, Matthew McConaughey launched into a semi-bizarre tale about his inner life.”

Then, dripping with sarcasm, the guy “parsed” the speech with a condescending spin.

Fact is, the acceptance speech was neither “confounding” nor “semi-bizarre.”

It was gracious and classy.

McConaughey said that “gratitude reciprocates.” After complimenting his fellow nominees, he thanked every member of the Academy, the movie’s director, his co-stars, God, his late father, his mother, his wife, and his kids.

And he thanked his hero.

“That’s who I chase. Now when I was 15 years old, I had a very important person in my life come to me and say ‘Who’s your hero?’ And I said, ‘I don’t know, I gotta think about that. Give me a couple of weeks.’

“So you see every day, every week, every month and every year of my life, my hero’s always 10 years away. I’m never gonna be my hero. I’m not gonna attain that. I know I’m not, and that’s just fine with me because that keeps me with somebody to keep on chasing.”

There’s a lesson there…

Always aspire to be better. In your attitude, your business, your relationships.

Work at becoming who you can be 10 years from now.