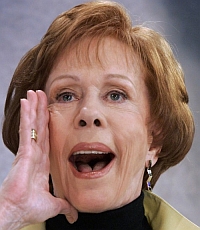 The most famous, of course, is the Johnny Weissmuller “yodel” from the 1930s MGM movies (which was ripped off for more than 60 years by other film and TV productions).

The other, also from the ’30s, began with James Pierce on the Tarzan radio series. His yell sounded like “Taaar-maaan-ganiiii.” Pierce was the son-in-law of Edgar Rice Burroughs, who created Tarzan, so his cry actually might be the more “authentic.”

I picked up this info in Los Angeles last weekend at Dum Dum 2012, marking the creation of Tarzan of the Apes in 1912, exactly 100 years ago.

I got to speak with (and get autographs from) no fewer than three Tarzans — Denny Miller from 1959’s “Tarzan the Ape Man,” TV’s Ron Ely from the 1960s, and Casper Van Dien, who played the apeman in “Tarzan and the Lost City” in 1998.

I attended the “first day of issue” unveiling of a new commemorative Edgar Rice Burroughs postage stamp, alongside the Burroughs family and a bunch of photo-op hungry politicians.

And the highlight of Saturday night’s banquet was a talk by British anthropologist Dr. Jane Goodall, who told us about her lifelong love for the Tarzan novels. (She was presented with the Burroughs Bibliophiles’ highly coveted Golden Lion Award.)

No doubt about it. Tarzan remains, after a century, one of the world’s most successful literary brands. That’s thanks in no small part to the foresight of Edgar Rice Burroughs himself. In 1923, he incorporated himself, successfully branding Tarzan, John Carter of Mars, and all his other literary characters.

There’s no question that creating a successful personal-business brand is vital to your success. But you don’t have to jump through all the legal hoops Burroughs did.