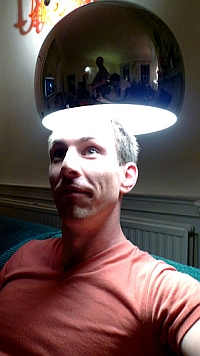 Here’s one of my favorite bits from Woody Allen’s Annie Hall (a movie stuffed with favorite bits, by the way)…

It happens at a cocktail party.

The place is filled with so-called Beautiful People.

The camera pans around the room and you overhear one guy say, “Right now it’s only a notion, but I think I can get money to make it into a concept … and later turn it into an idea.”

The scene brings a couple of thoughts to mind.

First, most of us spend more time dicking around with ideas than we do acting on them. As Robert Ringer wrote, “An idea, of and by itself, has no intrinsic value. It must be accompanied by action. Action cuts the umbilical cord and brings an idea out of the womb.”

Second, being struck with an idea of any sort is so rare for most of us that when we get one — during a jog on the beach or while speeding down the 101 freeway — we clutch it to our chest like a priceless thing.

Ideas are a dime a dozen.

If you make a habit of sitting down each day with your beverage of choice and a pad of paper and pay attention to your thoughts, you’ll gather more ideas than you can handle.

Of course, most of them will suck. Do this exercise enough times, though, and the gems will arise.

“But what if someone STEALS my great idea?” I’m often asked.

Well, claim the damn thing before somebody else does.

How do you claim it?

You take immediate action on it.

Ideas float around in the ether, and when a particular one wiggles into your brain, you can be sure it’s also wiggling into maybe tens of thousands of other craniums at the very same time.

The dude who acts on it first gets first crack at the big rewards.

So that’s the trick to ideas — taking ACTION.